My brother has been diagnosed with Schizophrenia 1.5 years ago, and stopped his medication almost 6 months ago.

He stopped talking to my parents and I for about a month now, he would suspect that I mixed something in his food, and would only consume food if he saw me eat the same food, he would isolate himself from everyone, doesn’t pick or answer any ones calls, and won’t sleep at all, he doesn’t want to be around anyone, only takes shower once in 2 days, doesn’t want to come out of apartment, even he is watching he doesn’t have any expression, he turns on 2 music devices at the same time. As soon as I walk in to a room he is in, he steps away, or covers himself with a blanket. I’ve been asking him to take medication, but he refuses to take them (he actually doesn’t even reply).

Recently he had an episode where in he suspected that my parents and I have planned something against to harm him, and started hitting me with phone on my head, and slapped me, I had bruises all over. So, I requested few of my friends to convince him to go to hospital with him, as he doesn’t trust me, they tried so hard but couldn’t convince him - he kept on going in loops and loops illogically. So, I requested a 96 hour detention from court where in he was forced to go to hospital, and was put under assessment for 96 hours, he was also provided with anti-psychotic medication but he refused to intake any of the medications. The doctor that assessed him mentioned that he has really low trust level and stuff but seems to be highly functional at this point, and is not considered a threat to himself or others… they can not enforce force medicate(21 day detention) and let him go. I tried to explain him to get on medication, he ran away 2 days ago saying that I’ve health issues and I need to go see a doctor. He is usually very disciplined person, and is never like this, I’ve known him for his entire life of 25 years and I can strongly say it is not him, and surely needs some help with medication. So, is there any way I can help him to take medication legally ? Please advise!

1 Like
Single mom, caregiver to my adult 32year old son, who has been diagnosed with paranoid schizophrenia
SzAdmin August 31, 2016, 4:26am #2

Very sorry to hear of your brother’s situation. I know exactly how hard it can be. I was in the same situation with a family member - and we didn’t manage to get him into treatment soon enough and he eventually took his own life. I tell you this only because treatment / non treatment can be a life or death branch in a persons life. Its important to get treatment as soon as possible. The longer a mind spends in psychosis, the more difficult it is to get the person back and into a more normal life.

I know that the laws of the country make it extremely difficult to get help for people in this situation. Its a huge issue for many of our loved ones.

This is such a big issue we have an entire section of our web site dedicated to it - I recommend you read all the materials on this page:

If you, or any other family members plan to have children - be sure to read our section on preventing schizophrenia here:
http://schizophrenia.com/prev1.htm

Also - I recommend you watch the videos below, and perhaps also purchase the book by this same author: 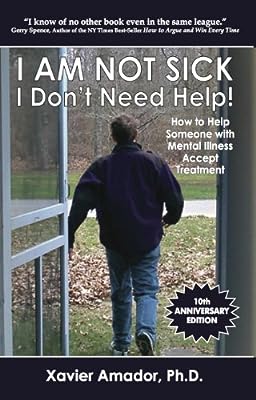 Amazon.com: I Am Not Sick, I Don't Need Help! How to Help Someone with Mental Illness Accept Treatment. 10th Anniversary Edition. (9780967718934): Xavier Amador: Books

'This book fills a tremendous void...' wrote E. Fuller Torrey, M.D., about the first edition of I AM NOT SICK, I Don't Need Help! Ten years later, it still does. Dr. Amador's research on poor insight ...

As a family member, szadmin has given you the list of things you can do.

Legally, in the USA, only a court can order involuntary treatment.

Please make sure to document all of your brother’s behaviors that show he is a “danger to self or others” or if he is “gravely disabled” by the illness and any documentation of legal standards for involuntary treatment used where you are.

If you could find out the treatment laws in your state
( http://www.treatmentadvocacycenter.org has a map of the USA with each state’s laws) or nation if you are in another country, you might be able to start the legal process for involuntary treatment.

All best to you and your family, especially your brother.

Remember - regarding getting people into treatment:

This is For Families New to Psychosis - This is just a reminder to everyone that getting treatment for psychosis as quickly as possible is important. The sooner the person gets treatment (therapy and medications is usually the best approach) the better the person recovers. Many studies have shown this. So - this story is not new, but just a good reminder. Researchers from Denmark and New York have found that in patients who develop schizophrenia or psychoses as children or adolescents, …

Really appreciate you reading my message, understanding my pain, and writing back your kind suggestions @Hereandhere @SzAdmin.

I currently live in MO, and I’m trying to learn more in finding ways to help. I tried my best in the first attempt of 96 hour detention by providing the doctors with affidavits and his old medical history of rejecting medications, and telling them all about his symptoms.

The team that assessed him for 96 hours mentioned that he neither exhibited psychosis nor exhibited threatful behaviours when he was under assessment at the hospital. But they did mention that he was exhibiting very high abnormal levels of doubt on everything - which they mentioned is more than normal human level, and have tried to provide him with some anti-psychotic medication. However since he came to know that they won’t do anything if he rejects medication, he didn’t even consume single dose of medication.

As per the doctor, he at this point is highly functional(as he did not prove to be threat at the hospital to him or to staff) so they can not file for 21 day detention to force medicate him. This is real sad and breaks my heart that the hospitals can’t do anything unless they see someone in a helpless mental ill condition. It is utter sad that they want a mentally ill person to voluntarily come to them and seek medical help as an option - which in this case is near impossible because of his Schizophrenic delusions and hallucinations that he thinks I need help rather than him. I’m his sister and I’ve known him for his entire life of 25 years, and this behaviour is certainly not him, he is very disciplined and well mannered individual.

In hope of some help in the direction of getting him some medical help.