How to get my sister to understand she has schizophrenia

Hello…I am a family member with a sister who has had schizophrenia for over 20 years. I am posting in here because I would like advice from someone who has schizophrenia, where as family members would not likely be able to answer my question which is this:

How do I get my sister to understand that she has this illness? For 20 years, no amount of doctors or social workers have been able to convince her that she is sick. I understand that this is a symptom of the illness, yet no one has been able to convince of her of this. So as a person with schizophrenia…how did you realize and accept that your hallucinations/delusions were not real? She is currently in a hospital and has been for almost 2 years and only seems to be deteriorating. Twenty years ago,
she was a thriving respiratory therapist and phlebotomist, and can now, no longer care for herself. She lives in a delusional world, and takes medication but its bear minimum. She has tried every med out there, and finds something wrong with each one, and fights the medical staff about taking it. She is 47 years old, and is well aware of her rights, so she is very non compliant. My parents have both passed away and I am now her legal guardian, with my hands tied and I’m broken hearted every day watching her deteriorate. Any advise for someone like me to help convince her she is sick? She simply won’t have it. Thanks very much

I do not know, but somehow I thought that she would know that she is ill because she has been in a hospital and you are her legal guardian, but I would assume she has something against her meds, medical personnel and her mental treatment. Also when people get older their functioning becomes worse than that functioning was when they were younger. Just my thoughts.

Agreed…I have tried to point out to her as did my parents when they were alive that it is not normal to spend your life in and out of hospitals and that she should at least consider listening to us and her doctors, but she still believes what she believes and insists we are the ones who need help. She reminds me on a daily basis, that I need therapy and that there is a conspiracy against her. I’m at a loss…thanks for responding.

Try to take her to a psychotherapist, that’s what she needs. She thinks that life is only hard life and that’s why she won’t listen. Tell her other people with the same problem get happier with meds and psychotherapy. I hope she understands! Also try to persuade her to write here! Today it helped me a lot! Good luck

Yeah I think mj is correct some of us steadily get worse prolly no matter what.

Over the course of 20 yrs I’ve went from hearing voices as background noise to believing that I may be some kind of angel sent by God to witness the state of the world so he can decide on ending it.

I’ve actually taken on that “classic”" Holy aspect that you see in the movies where some disheveled dude thinks that he’s Jesus…I don’t think im Him that would be a bit presumptuous…maybe just a angel of some sort.

I wouldn’t go aggro on her about how she is merely ill and just try to work with her to function day to day. Otherwise you are just going to make her more paranoid. Listen to her and be her friend. People can believe the voices are real and still have some kind of life, without guardianship or hospitalization. Cognitive therapy might help her think clearer about her situation. It is more about how she responds and deals with the voices than whether she thinks they’re real or not in my book. I personally think my cognition is better than a lot of the schizos who believe the voices are hallucinatory.

What I would tell her is regardless of whether she believes the voices and things she’s experiencing are hallucinatory that they have found the medications help. They don’t know why they help (mechanism of action of antipsychotics for schizophrenia is unknown according to the FDA), but it just does. Explain that these types of experiences she is having fit the profile of what they call schizophrenia, and regardless of what causes it, which is unknown according to the government, psychiatric medication does help, and that although the medication is horrible to take, it is the lesser of two evils and that the side effects diminish over time.

I don’t know, that is the line of reasoning I would try to apply. Instead of being a dictator saying YOU HAVE AN ILLNESS, I would give some leeway and apply analytical reason. This is similar to cognitive therapy. Pragmatism is if it works, do it. We don’t always know why, but if it helps embrace it. The same is true for this situation. Even if you don’t convince her she is insane, at least if you can sway her to take her medication that could be a game changer.

But we honestly don’t have much to go on about your sister. I mean, you say she is schizophrenic and delusional, but you don’t drop a word about what she actually believes is going on. There are different approaches you could take depending on what her beliefs are behind the experience. If she thought it were a technology working her brain like the targeted individuals believe, that will be harder to work with in my opinion than the ones like me who view it as metaphysical.

After all, the targeted individuals have a Scientology stance on medication. They can’t wrap their minds around how a drug could help, which in their view would equate to blocking out electromagnetic rays coming from a satellite dish. However, many people who have serious suspicions it is partly a spiritual condition are on these forums trying to cope, complying with medication, and even getting therapy. So there’s major distinctions in how to reason with the person.

Call me crazy, but that is what I think. You might not be able to totally convince her she is insane, but you could through reason mold her beliefs and how she deals with it in a way that is more functional.

Yo Daimon you craaazy.

You do have to reason with them. Can’t take a strong stance, they won’t believe you anyways.

What is her particular delusion or set of positive symptoms?

But first and foremost, she is your sister and that means you have to be a friend first and not a doctor or parent. Build trust, she might start listening to you. In order for that to happen, you have to listen to her.

**Hi @Allyzona!
I am in a similar situation right now with my son. I am trying to figure out how to get my son into the hospital without causing chaos ( like involving the police ).
Im not sure how to approach this at the moment. Im sorry about your sister and I hope they can get her some form of therapy in the hospital… **

Wow…I must say that I didn’t expect such wonderful feedback, and so promptly…thank you everyone for reaching out on this subject…Daimon, thank you…I like the idea of cognitive therapy. I don’t know much about it, but will look into it…you are right in that you don’t know much about her so let me help here as best as possible.

She has robbed a bank three times in the last 15 years…the most recent was two, plus years ago which landed her in jail, and subsequently the hospital, where she is now…she has done this for two reasons…she either thought she needed to share intelligence with the FBI/CIA, or felt she needed to be in jail to be safe and felt robbing the bank was the best way to get there. Over the years, she was convinced she was engaged to a Metallica member, thought she was Jesus christ, relates current news such as bombings, murders, plane crashes etc. to her influence with the military and regularly reminds me that she is a very important person. She called me the other day to tell me that she was taking me off my respirator and was sending me to heaven…she said she was going to miss me but she had to do it…I don’t even know what to say about that…but I always just listen and try to redirect the conversation to something more pleasant or rational…she is in the only hospital in the state (Georgia) that could take her and she is four hours away from where I live. I visit her once a month and talk to her daily…sometimes multiple times…my parents didn’t have a lot of money so she was never able to get good private care though we have always been grateful for the state help we get though it is minimal at best…I just feel like if she would understand she is ill she could participate in her wellness but if she doesn’t get it, then she will just continue to deteriorate…thanks so much for reaching out…

Thank you again so much everyone…I’m learning so much just from his thread.

And just for the record…I am not now, nor ever have been on a respirator…that’s part of her dillusion I suppose.

It sounds like it would require a good therapist and cognitive therapy.

It also sounds like she might be trolling you. It almost sounds like she is high or on drugs. She could be messing with you about some of these comments. I used to say weird comments to my dad just to get a reaction.

The latest weird comment I made was whether he thought if we put the brains of retarded people in the bodies of dogs at birth they would live happier lives. It is just a sick joke, but what makes it funnier is if the other person thinks you’re posing a serious question.

Maybe, do it bit by bit. Talk to her about the illness…I mean ask her what does she think of it. These days it’s very simple to find literature about Schizophrenia…Do not give her any reason of her irrational behaviour, just point her to the literature and ask her what does she think of it. Try to relate some of her delusions and beliefs with the illness…Share the stories of people who have recovered and are progressing in spite of illness. Who used to have similar behaviour. / beliefs…

I guess convincing her to take medicines would be the hardest part. Don’t feel yourself alone, there are many who have been in such a situation. You would find some help…

My son also suffers from this symptom from time to time. He struggles to have awareness and insight that he has an illness. It’s called Anagnosia. I read a great book that helped me try to help him, it’s called “I Am Not Sick I Don’t Need Help” by Xavier Amador.
Good thoughts! : ) 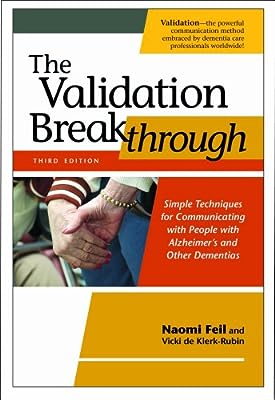 The Validation Breakthrough: Simple Techniques for Communicating with People with Alzheimer's and Other Dementias