Insane Consequences - Book: Anybody read this?

Authored by DJ Jaffee and Dr. Fuller Torrey (author Surviving Schizophrenia). Jaffe seems more of a grassroots kind of guy and has an interesting narrative - runs a website which I haven’t reviewed in depth. Just wondering if anybody has any thoughts/opinions?

I just downloaded a sample to my kindle. At a glance it looks like DJ Jaffee is ringing a bell that Dr Fuller Torrey has been ringing for a long time.

I just bought this book because my library doesn’t have it. Have not read it yet, but am looking forward to it.

Me too. I was surprised how many times its been checked out at my library.

I think you are very right…

Now that is interesting isn’t it? One of the elderly lawyers in our area told me I would be shocked if I knew how many families in our area deal with family members with brain disorders.

I think that’s absolutely true. Whenever I mention my son’s illness, there is always someone who says - oh, I have a brother/an uncle/a relative who also has the illness. That’s one of the reasons I don’t hesitate to talk about it - no more hiding!

I’ve read the book. I’ve also met Jaffee (at a NAMI convention). I thought the book made some good points, but I also thought it was very one-sided. I particularly don’t like his habit of almost ridiculing the pain and problems of types of mental illness he doesn’t deem worthy.

That said, I care most about SMI too. I just try to advocate for that without tearing down others.

I also find his argument about AOT to be really simplistic and ignores that involuntary is horribly traumatic for many - even those who say it eventually helped them. I thought the book “Committed: The Battle over Involuntary Psychiatric Care” by Dinah Miller and Annette Hanson was more balanced and looked at all sides of the challenges.

However - we definitely need to think about solutions that give families some option other than 911 when someone says they don’t need help but they absolutely do. I’m actually working on a concept project for just that - still figuring out some funding models. But it’s essentially relentless outreach coupled with PACT (Program of Assertive Community Treatment) that is person-centered - reaching them through what they want to change about their lives.

I think your project is a great idea and I am hopeful you will update us.

It’s not possible to help people meet their goals when those goals involve escaping from martian mind control or not having implants in their bodies or proving that they are secret billionaires or evading the Truman show that is their lives or that their closest family and friends have been replaced by replicas and they need to escape them. When hallucinations, delusions, and other positive symptoms of psychosis take over a person’s life, there is no way to help in the current system without involuntary commitment.

It’s not whether the problems are real or not, it’s how severe they are. Since there are extremely limited resources to help people with mental illness, the medical triage model of helping the most debilitatingly ill patients FIRST should apply.

If a person has not been witness to full psychosis and the effects on the person who suffers the illness and those closest to them, it’s impossible to understand how different their relationships to reality and to the people who love them are. Is “relentless outreach” for people who are already homeless? Already incarcerated as hundreds of thousands of people with SMI are.

Like I said, I am genuinely interested in what you are doing, but I don’t see any other way than involuntary commitment to help the most severely ill. Just like I think that people with heart attacks might need to be treated with bypass surgery or stents while people with high cholesterol can make lifestyle changes and will not need surgery or to go to the emergency room, some people with SMI are so profoundly ill they need immediate treatment in a contained and safe medical environment in order to prevent harm to themselves or others.

The trauma of being involuntarily committed to a hospital is far LESS THAN being in solitary confinement in jail or prison. I agree that the system needs to be reformed so that involuntary commitment causes less trauma, but civil commitment remains exponentially better than long-term homelessness, incarceration, suicide, or other preventable death due to psychosis. These are all real outcomes that are happening to people with SMI every single day we do not act to provide medical treatment to those who need it the most.

Thanks for your thoughts. I have also been there. My son is 37 now and had his first psychotic break at 20.

I’ve spent a good part of the last year learning as much as I can about AOT going into it convinced it was the right thing for this situation. I now find myself considering more options after that exploration. Folks on both sides of this issue are pretty entrenched in their corners. I’m trying to craft something I hope would find (some) support from both sides. No one is actually happy with the current, badly broken system.

Your point is well taken that hallucinations get in the way of setting achievable goals, but I’ve been lucky enough to work with some experienced folks that do think relentless outreach can work for some of the so-called AOT population - to patiently convert them from distrustful to be able to engage through relentless outreach. That’s not relentlessly saying “take your meds”. It’s showing up day after day to demonstrate you care enough to keep coming back.

FWIW, I’m focusing on individuals who are not yet homeless. Those who are still connected to someone and most likely living in a basement or a closet but convinced they don’t need treatment. It would be a lever a family member could pull to get someone on the list for relentless outreach. And right now - it’s entirely just an idea, but it’s one that I’m working on and so far getting some really good (mostly positive) feedback.

I really appreciate your points - I absolutely need all types of feedback. Thanks for replying.

I spent all Saturday night on his website. Incredibly informative as well as step by step ways to be an advocate in your state and to initiate change. It’s something I have decided to focus on in the upcoming months. My uncle had been very active with our states legislators helping to rewrite mental health and addiction laws and I seem to have other connections in the state to help navigate ways to collect information (lawyers, Director of the United Way for a neighboring county, and many activist friends) and help to be heard. Regardless of what the outcome is for my relationship, this is something that needs attention and could provide hope for so many others.

You are probably familiar with this great model:
https://www.amazon.com/Recovery-Ragins-Medical-Director-Village/dp/B0045DNN2A

@Hereandhere - I had not seen that and will definitely take a look. Thanks for the share!

They do tons of outreach and have great policies like participants can read their medical records whenever they want to and correct the records themselves if that is needed.

“Committed: The Battle over Involuntary Psychiatric Care” by Dinah Miller and Annette Hanson was more balanced and looked at all sides of the challenges.

Good to know - I’d like to look into this one.
Your project sounds interesting. Any grant funding available? Is it through an institution?

The trauma of being involuntarily committed to a hospital is far LESS THAN being in solitary confinement in jail or prison.

I hadn’t thought of it that way - really good point!

I work as a librarian at a downtown library where 90% of our patrons are homeless. I see schizophrenia everywhere. We have a computer lab with 40 + computers and at any given time I can comb the room and see a handful of people experiencing a psychotic episode. They are unmedicated but they feel safe there so I can approach them carefully and when they see me usually realize that they have become too loud. But the unmedicated SMI are mixed in there with everybody else. It seems like it would be a good place to meet them where they are, at the library all day.

Yes, good idea. A few libraries are doing this. I couldn’t go through all the articles, but here’s one: 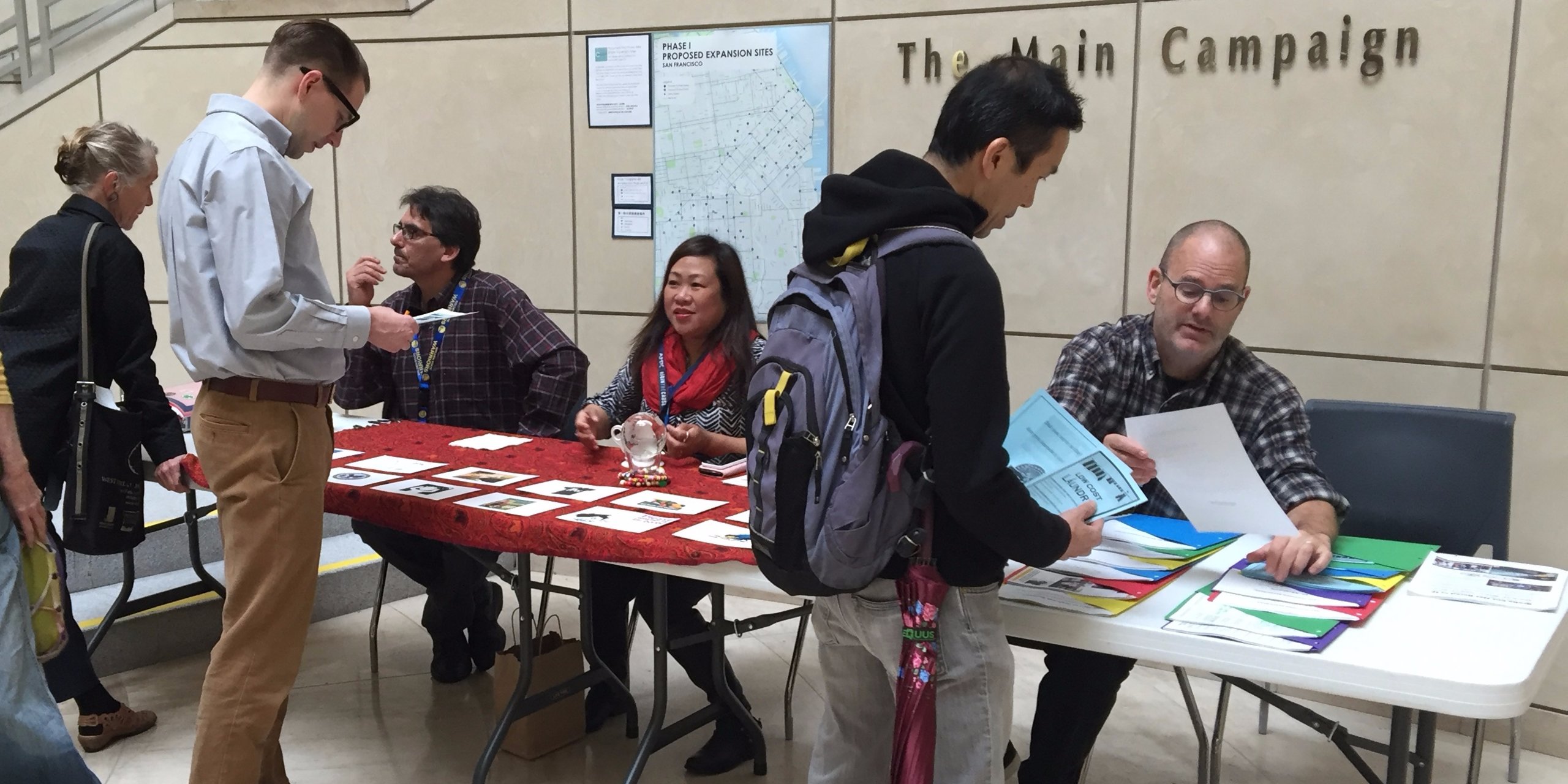 San Francisco put a social worker for homeless people in a public library, and...

It's a trend moving across America.

Monica this is so much what people need. I too would love to be able to help my son other then involuntary committing him or calling 911. If there’s any way I can be involved with what your trying to accomplish please let me know!

Right now it’s a concept paper that I’ve been taking around to get feedback. It’s essentially the idea of using relentless outreach (like an organization here does with high risk youth - http://rocainc.org/) backed by truly person-centered PACTs (note this can include medication but doesn’t actually require it). The trick is in the funding model. I’m still learning about Social Impact Bonds - http://www.payforsuccess.org/ - and need to develop a more solid story for that. It’s not my intention to actually build these programs as much as facilitate those who know why more about this than I do. In that regard, I’ve had some pretty positive feedback - all the pieces are known, but I’m putting them together in new ways. Some folks are showing interest. So that’s goodness.

So - I don’t want grant money - nothing sustainable happens that way! I want to make this work for the long haul

And of course, just like Roca doesn’t reach everyone, neither will this. But… it would do two things that matter to me 1) give families someone to call 2) avoid the involuntary aspect of AOT

To be clear, the target population for this are not folks who are already homeless or incarcerated. The former probably would most benefit from a Housing First initiative; the latter, sigh, I am at a loss. This is really meant for the folks we are all talking about on these forums - still living in someone’s house, basement, etc. but refusing treatment, don’t think they are sick, etc.

This idea is only a few months old and I figure it will take a few years to see it through.